The Honesty Of Children

(CNN) – A study from CNN has found that by age 13, a majority of African-American children have a subconscious racial bias against white children.

According to the study, a majority of 6-year-old black children were optimistic about race relations, but as they got older their opinion shifted.

Davionne, a first grader at a majority African-American elementary school, has already formed an opinion on race relations.

He said that he wouldn’t let a child of a different color be his friend “cause your mom might not want you to play with that friend.”

His mother, Aisha, is a teacher in her son’s school district, and she’s not sure where her son got the idea that she would get upset if he played with kids from different races.

“I’m a little bothered by it,” she said. “Just because I don’t want him to feel I would think that or expect that…. Whoever is his friend is his friend, so I’m not sure why he would feel that way. It just concerns me that he thinks like that.”

Davionne’s father, David, thinks he might have an answer to that question.

“I know for a fact that that’s not my son, as far as the answers he was giving,” he said. “I think he answers the way he thinks people want him to answer.”

The parents will now face the question head on with their son.

“I’m a little concerned,” Aisha said. “Whenever you have something like this, you get to really look at what’s going on, and if you’re already approaching it [interracial relationships] as a pessimistic state, what’s going to happen later?”

The interview is part of an ongoing series by CNN on race relations through the perspective of children. The network’s study found that African-American children had an overall better view of race than their white counterparts.

Posted by caseclosed2 on April 6, 2012 in Education News

While the analysis doesn’t prove cheating, it found troubling patterns in hundreds of cities. Those patterns resemble early indicators in Atlanta that ultimately led to the biggest cheating scandal in American history.

This map shows the number of classes in each district and the percentage of those classes that were flagged over a four-year period. A class is a group of students in the same school from one year to the next. For example, fourth grade students in 2009 and fifth grade students in 2010. A “flag” only indicates a test-score shift outside the norm. Smaller districts with fewer than 20 classes are not included.

Posted by caseclosed2 on April 4, 2012 in Education News

Our Children Can Learn

Posted by caseclosed2 on April 1, 2012 in Education News

They Did It Again 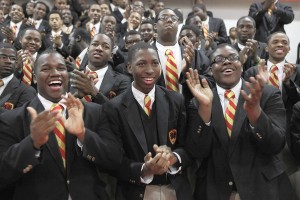 March 30, 2012
For the third year in a row, every senior at Urban Prep Academy, the only all-African-American, all-male charter high school in Chicago, has been accepted to college, the school’s leaders said.

The academy also said that 83 percent of its first graduating class in 2010 has re-enrolled in a second year of college, a rebuttal to critics of the school who have charged that students aren’t always ready for college.

Critics have also suggested that Urban Prep squeezes out students with academic and discipline problems who other schools have to work with. Urban Prep officials acknowledge that this year’s senior class of 85 was almost twice that size when the boys started out as freshmen.

But Urban Prep CEO Tim King, in a meeting Thursday with the Tribune’s editorial board, vigorously denied that troubled students are forced out or encouraged to leave.

“We take the opposite view,” King said. “We devote time and energy to those students so that they understand they can do well and they can have success if they modify their behavior.”

Urban Prep’s success in making college a reality for African-American children from tough, low-income neighborhoods has won national attention. Last year’s graduation rate for African-American males in Chicago Public Schools was 44 percent. About half of those who graduate enroll in college, according to CPS.

Julie Woestehoff, executive director of Parents United for Responsible Education and a leading critic of charter schools, said the perfect college acceptance rate at Urban Prep is not showing a true picture of what is taking place in the school.

“The aura of 100 percent is just a cover for what is a fairly typical Chicago public high school where about half the kids don’t graduate,” Woestehoff said. “They may say they’re not forcing or encouraging kids to leave, but what is happening? The public has the right to know, especially when they present themselves as a miracle. This is not a miracle.”

Urban Prep spends about $12,000 per pupil — far more than a typical CPS school. Once students graduate, the school stays in touch with them. A rigorous alumni department brings students in over the summer to familiarize them with the challenges ahead and continues to contact graduates twice a month by phone, email or on Facebook.

Posted by caseclosed2 on April 1, 2012 in Education News